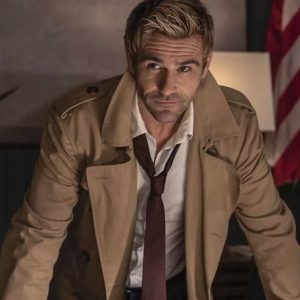 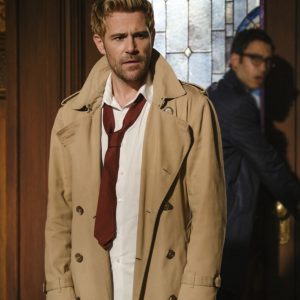 Legends of tomorrow is a 2016 American action and superhero series. It premiered on the network CW. It is based on characters of DC comics who have teamed up as the legends. The fifth season of the series was released in January 2020. The story discusses how Rip Hunter, time master, has gathered up the team of legends to fight his enemy and save the world from an apocalypse. It has received a lot of positive reviews from the critics praising its acting, comedy and action.

John Constantine is a fictional superhero of DC’s Arrowverse franchise who is a part of the team of legends where he hunts down demons, his character is portrayed by dashing and handsome Matt Ryan wearing this outclass coat.

This John Constantine Coat is made from high quality wool-blend with inner viscose lining which remarks great amounts of comfort and warmth. It has a classy double breasted closure which adds to its charm. It also has a notch collar which looks extremely stylish and attractive. The cream colour of the coat gives out a charming appeal and improves it on a classic. It comes in full sleeves with buttoned cuffs.