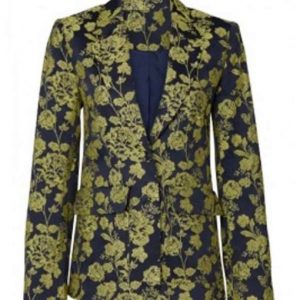 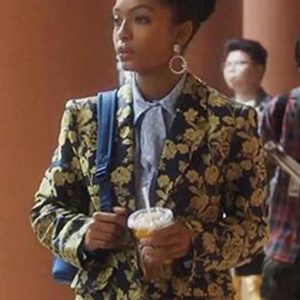 Grow-ish is a comedy-drama sitcom which was released on January 3, 2018 on freeform. It revolves around the Johnson’s family eldest daughter Zoey moving out of her home for college, realizing that the journey to adulthood was not so easy and what she expected. It is a spin-off of ABC series black-ish.

Zoey is the protagonist and narrator in the series who is majoring in fashion at college to fulfill her career goals, her passionate personality as well as modern attire has moved many teenage fans out there. For those fans impressed by her, we have replicated the exact blazer she flaunted in the series looking as attractive as wear.

This Grown-ish Zoey Johnson Blazer is fabricated from premium quality cotton fabric which gives you ultimate comfort and makes it easier to wear it for long hours. The inner viscose lining further maximises ease and cosiness. The peak lapel collared design surely adds a sense of fashion and standard to the already sophisticated blazer perfect for formal parties and evenings. Its opening is front buttoned which makes it appear classy and suits the look of the blazer. The full sleeves with open hem cuffs give it a fancy look. The flower patterns of yellow golden colour on the blue base look extremely flattering giving the blazer an eye-catching look. Two side waist pockets have also been placed to make sure that you have enough space for storing your stuff like keys and wallet in it