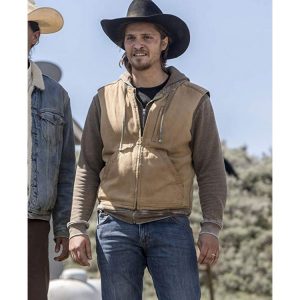 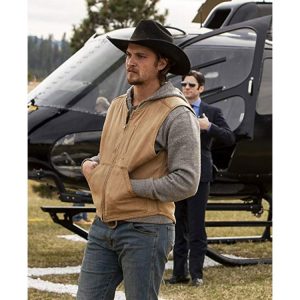 Yellowstone is an American Drama series released in June 2018. The series has a total of two seasons up till date. The series revolves around how the Dutton family manages the large ranch yellowstone while the border forces try to take it over. It has a total of 19 episodes. The series will be renewed into a third season this June by paramount network. It is created by Taylor Sheridan and John linson.

Kayce Dutton was the son in the dutton family and a former US Navy SEAL, the character was portrayed by Luke Grimes looking handsome as ever in this exotic vest.

This Kayce Dutton Vest is made from cotton fabric along with inner viscose lining which maximises comfort and warmth. It has a fashionable rib-knitted neckband which improves on a classic. The bordered YKK zipper shutting which enhances the masterpiece and makes it appear eye catching. It comes in a light beige colour which gives out an elegant and trendy appeal. You can also store your stuff in its welted chest pockets and waist pockets.